The installation of the Dutch Wheel wheel in Chicago is in full progress. ABC 7 Chicago wrote the following article:

Our relatively mild temperatures and calm winds Monday made for perfect working conditions for crews. Each gondola weighs more than one-and-a-half tons, and they’re climate-controlled, so the Ferris wheel can operate year-round.

After this phase of construction is complete, there are still weeks of engineering work and testing that need to be done. Navy Pier officials say the attraction is scheduled to open Memorial Day weekend.

With pinpoint precision, they’re installed one by one – 42 gondolas forming the jewels in the crown that is the new, towering Navy Pier Ferris Wheel. “These gondolas are made in France. We found what we believe are some of the best gondolas out there, and people will be able to experience a view of Chicago like they’ve never seen before,” said Brian Murphy, Navy Pier chief operating officer.

The new state-of-the-art gondolas feature leather cushioned seats, as well as video screens playing Navy Pier information. Compared to its predecessor, which was built in 1995, the new Ferris wheel can accommodate 180 more passengers. Navy Pier officials are promising a longer ride experience. “With the previous wheel, there was one slow rotation of the wheel. You got on while the wheel was actually moving. This new ride, the Ferris wheel will stop and will load up to six gondolas at a time. And once people are fully loaded, then we’ll spin them several times around,” said Murphy.

Construction began in mid-January. And the project is ahead of schedule thanks to our relatively mild winter. The new, 200-foot-high Ferris wheel comes as Navy Pier this summer celebrates its 100th anniversary.

“We’ve had a Ferris wheel here for the last 20 years,” Murphy said. “We want to keep that tradition going, and we just felt like with our centennial vision, our hundred-year anniversary, now was the time to be able to do that, and we went with a bigger, better Ferris wheel.” 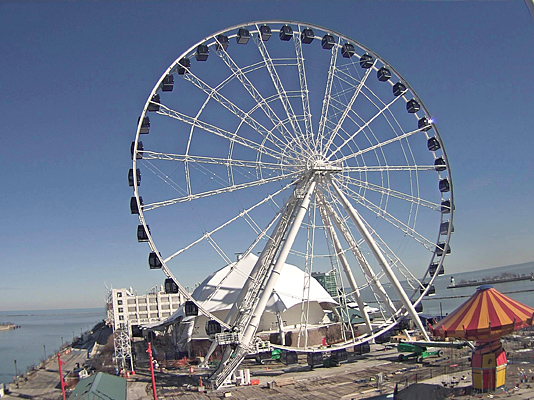